Since the move to the new Electronic Patient Record in Aspen, patients have been experiencing problems with online services.  The practice has updated the information on their Practice IT System Change and Online Access news article.

Following the system migration patients are no longer able to log in to online services using the EMIS Patient Access Log in. Logins via the NHS app are unaffected.  These are some short video guides to help you download and set up the NHS App.

Why I use the NHS App | NHS Digital

at December 09, 2022
Email ThisBlogThis!Share to TwitterShare to FacebookShare to Pinterest

Aspen medical practice will be changing their clinical system provider from EMIS to TPP SystmOne between 11th-29th November 2022.  Why are we moving? the system will give us more functionality with providing GP clinical services and also integrates with community services who use SystmOne.

SystmOne will allow for communication with patients, enabling healthcare professionals to send text messages or emails to those who are due to receive vaccinations. Clinicians can also use the Airmid or NHS App, through which notifications can be delivered directly to a patient’s phone.  To download Airmid see the video below

Clinicians can access a patient’s existing record if they are already registered on SystmOne, enabling them to retrieve and record pre-existing data without having to start the process from scratch. For those patients who are not currently registered on SystmOne, users have access to PDS and GP Connect functionality, meaning a patient’s demographics can be retrieved from other systems, further speeding up the registration process. If a patient is already registered on SystmOne, all data from the process is recorded directly into their existing electronic health record, rather than just the basic vaccination details. This ensures their contact with health services in the future is well-informed.

There will be some disruption, however, as we move systems, we will do our upmost to ensure we keep disruption to a minimum.

at November 09, 2022
Email ThisBlogThis!Share to TwitterShare to FacebookShare to Pinterest

Big Congratulations to Gill and Sandra for being highly commended at the BBC Gloucestershire Making A Difference Awards at Cheltenham Race Course on Saturday 24th September 2022.  Gill and Sandra have been instrumental and the driving force behind the Aspen "WalkTalkWalk" group and listening to some of the members who attend, you can certainly see the benefits this group is having on patients.  Many congratulations Gill and Sandra!
The walks for October through to December are available on this link
at September 26, 2022
Email ThisBlogThis!Share to TwitterShare to FacebookShare to Pinterest 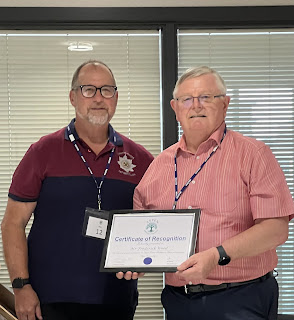 It was great to see Fred attend the PPG AGM on Friday, which gave us the opportunity to say thank you and farewell.  Fred has been involved with the work streams and led the Armed Forces Veterans group.  Unfortunately due to personal reasons Fred has decided to step down but will continue to support the PPG in the background.  Fred is a big driver of the veterans group and has provided us with his expertise in this area.  Our biggest drive has been the clinical coding of veterans that provide additional benefits to registered veterans at the practice who need specific pathways such as Op Courage or orthopaedic care. Fred is a veteran himself and has experienced veterans support when admitted to hospital, where they noticed his status on his record and asked if he needed any assistance from the hospitals veteran champion.  The PPG has a few veterans on the group and will continue where Fred left off, supporting the veterans work and the practice as a Veterans accredited practice.  We wish Fred all the best and good health in the future.
at July 31, 2022
Email ThisBlogThis!Share to TwitterShare to FacebookShare to Pinterest

The AGM will be held normally each year and no later than the end of July. Dates and timings will be confirmed at the previous PPG meeting.
Notice of the day, time and place will be given via notice boards, website, social media, practice newsletter and by email to PPG members, being given at least 21 days' notice, to allow for nominations and absentee voting for members only.
Any items for the agenda shall be sent to the secretary for consideration at least four weeks prior to the AGM date.  The AGM agenda will be confirmed by the Chair and vice chair. At the AGM the Chair and Treasurer will give a report before the election of officers
Any member wishing to stand for any of the officer posts, must receive a nomination and be seconded (by two individual members), and nominations should ideally be sent into the Secretary prior to the AGM, who will confirm the receipt of this and to allow for absent voting. Once all nominations have been received and confirmed at the AGM, including any absentee votes, then the rest of the members vote, and it is the individual who receives most of the votes, who is voted into post. In the event of a tie, then the vote must be re-run. The term of office for each post must be elected annually at each AGM.
Each member of office can only serve a maximum term of three years.
Details of the meeting are as follows:
PPG AGM Agenda: Friday 29th July 2022, 17:00 - 18:30hrs

Patients who wish to dial in, can do so using the details below

Join on your computer or mobile app: Click here to join the meeting

at July 18, 2022
Email ThisBlogThis!Share to TwitterShare to FacebookShare to Pinterest 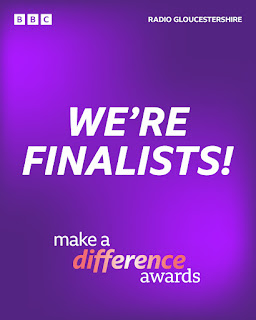 Many congratulations to Gill and Sandra who have been shortlisted for a BBC Gloucestershire making a difference award.

They were nominated for setting up the PPG ‘WalkTalkWalk’ group to enable Aspen patients to take part in gentle walks and tackle isolations and loneliness.  There have been a number of walks set up, which also includes refreshment breaks on route, giving everyone the opportunity to build on the community set up by the group. Everyone who attends the walks go at their own pace, ensuring that the slowest is not left behind and have the opportunity to talk with other likeminded patients in the group.

The response and engagement from patients has been amazing. The feedback is very positive, folks saying they really welcome the opportunity to be outside for some gentle exercise and most of all, meeting others.

The winners will be announced in September at the Cheltenham Racecourse.  Well done both, you totally deserve this recognition.

at June 18, 2022
Email ThisBlogThis!Share to TwitterShare to FacebookShare to Pinterest


at January 31, 2022
Email ThisBlogThis!Share to TwitterShare to FacebookShare to Pinterest

Car parking issues have been raised with the PPG, which has been discussed with the Aspen Medical Practice senior partners who are aware of the number of complaints recently received from patients.

The current Situation with Parking

The management of the Aspen Centre car park was contracted to Creative Car Park Ltd by the site landlord Assura PLC. The current parking issues have impacted all tenants of the Aspen Centre - Newmedica Eye Health Clinic & Surgical Centre, Studio Fit, Badham Pharmacy, the Gloucester Royal Hospital Dermatology Department, and Aspen Medical Practice. Aspen Centre visitors should park in the dedicated parking area of the service they are using and enter their vehicle registration number using one of the check-in screens located at that service.

Aspen Medical Practice recognises and apologises for the distress caused by the parking fines issued by Creative Car Parks Ltd at the Aspen Centre to its patients and have provided a response to recent events. 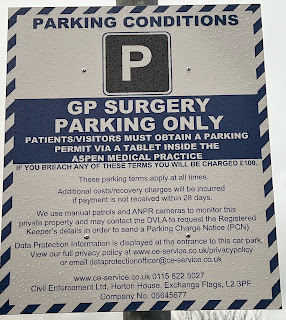 For Aspen Medical Practice patients who wish to lodge a complaint against the car parking company Creative Car Park Ltd, their email address is office@creativecarpark.co.uk. The landlord of the Aspen Centre can be contacted at the email address info@assura.co.uk.

You can also email PALS at ghn-tr.pals.gloshospitals@nhs.net or write to them at: PALS Office, Gloucestershire Royal Hospital, Great Western Road, Gloucester, GL1 3NN.

at January 07, 2022
Email ThisBlogThis!Share to TwitterShare to FacebookShare to Pinterest

Medical Receptionist “We want You” 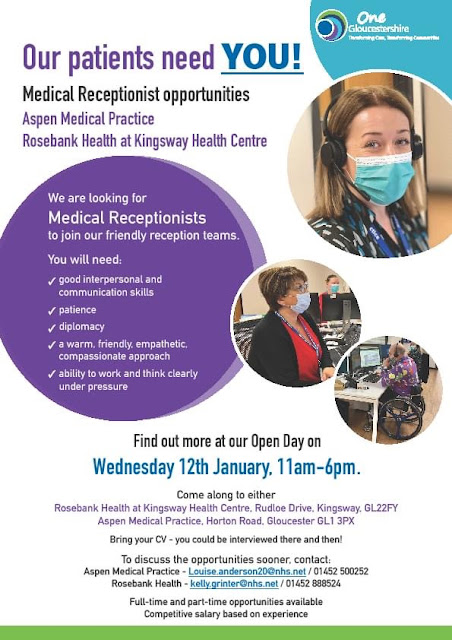 at December 25, 2021
Email ThisBlogThis!Share to TwitterShare to FacebookShare to Pinterest 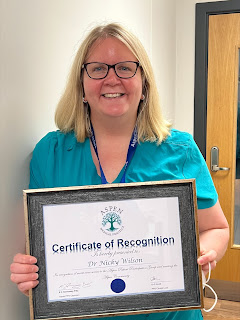 The PPG wishes to show its gratitude to Dr Nicky Wilson who has been the PPG Clinical Lead.  Nicky has been the senior partner supporting the PPG as part of her portfolio and has been instrumental in shaping the PPG with the group.  Nicky is moving on to other projects within the practice and has handed over to Dr Sam Kuok, who will take the clinical lead role for the PPG and work closely with the PPG to strengthen the links with the practice, and provide much needed support to develop the Aspen Community.

The Chairman said "It has been an absolute pleasure to work with Nicky who is a dedicated and caring health professional, who is clearly driven to provide the best patient care to the patients who are registered at Aspen.  We are are very fortunate to have Sam take over from Nicky who is very energetic and strives to provide the same values that Nicky has displayed during her tenure" We would like to wish Nicky all the best in her next venture and welcome Sam to the PPG.

at December 17, 2021
Email ThisBlogThis!Share to TwitterShare to FacebookShare to Pinterest

Merry Christmas to all our followers 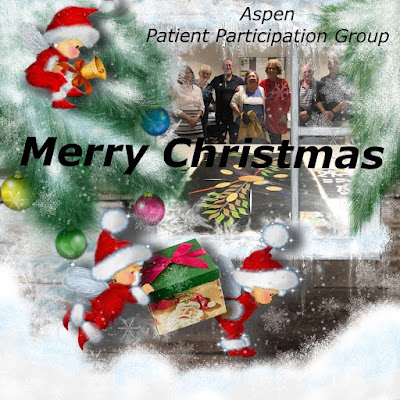 The Aspen PPG would like to wish all our followers a Merry Christmas and a safe New Year
at December 17, 2021
Email ThisBlogThis!Share to TwitterShare to FacebookShare to Pinterest
Older Posts Home
Subscribe to: Posts (Atom)

Since the move to the new Electronic Patient Record in Aspen, patients have been experiencing problems with online services.  The practice h... 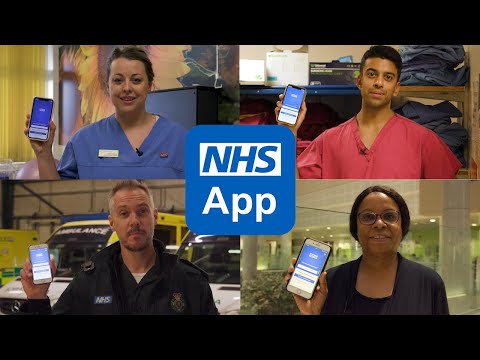